How To Test An MVP? 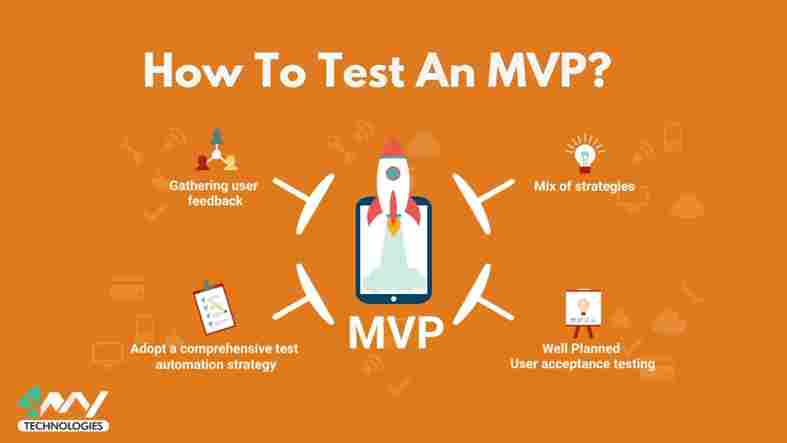 Eric Ries is a famous American Entrepreneur, who is behind the growing popularity of a Minimum Viable Product (MVP) concept in one of his books “The Lean Startup”. He defines MVP as a newly launched and down-scaled product with limited features and functionalities. An MVP is responsible for collecting maximum validations and feedback from the users with less effort.

A Product is known as viable only when it fulfills some specific needs successfully in the market. The viability of a product also differs and varies according to the requirements of a product.

Though many developers, like you, are aware of the fact that a minimum viable product is not the complete version of the product, testing an MVP plays a vital role in inspecting some existing issues and fixing them for an MVP.

In this article, we have mentioned some of the best MVP testing strategies, which will help you in several ways to launch a perfect minimum viable product without any error or issues.

Questions like “What changes can we implement to make sure that our product will be successful?” can be answered and solved only after collecting the feedback from the user of a specific application. While designing a minimum viable product, it is quite essential to test and analyze the feasibility of your app’s concept and idea along with fulfilling the requirements of the customers. After spotting and defining the problem or error successfully, coming up with the best possible solution would be the next important and logical step.

Although you research deeply for a project along with looking for a competitor’s product as well, testing your MVP will be one of the most critical and important steps before the launch of your limited featured application.

Creation of an MVP is less risky and more affordable. When you adopt an impeccable testing approach, you can transform your minimum viable product into a scalable, robust, and powerful product.

A well-defined approach for testing an MVP includes various major minimum viable product testing strategies. We have explained some of the top MVP testing strategies in order to get the most desirable and efficient product.

What is an MVP?

MVP is the short form used for minimum viable product. It is a testable version of your final product with limited features and functionalities that are responsible only for attracting early adopters of your product and validating the idea of the product. The primitive reason behind creating an MVP is to understand the relevance of the product and how viable it will be among the users.

What Are The Different MVP Testing Strategies?

Customer interviews are responsible for collecting valuable information about any problem, which your product can solve. An interview must explain its central value rather than selling the product. In this way, we can make a list of all problems that our product solves and show it to the customers. We can also ask them about their opinions and categorize the existing issues. These interviews play a vital role in providing you the necessary information. Also, if you realize that the problems, which were identified earlier are not important any more for the customers, you will still have the data handy in order to help you create an impeccable proposal.

With the help of a crowdsourcing or crowdfunding approach, you get enormous chances to invest in your startup. It also allows you to check the appealing status of your business’ central idea and MVP.

When it comes to choosing a crowdfunding route, your primitive task is to select a preferred platform such as Kickstarter, Patreon or IndieGoGo, which will help you in presenting the central idea of your product. You should also analyze the crowdsourcing campaign after its launch. If you observe that the backers are interested and you also receive investment, then, it is for sure that your idea is appealing and acceptable by the market.

Pre-order Pages is another flawless test available for your minimum viable product, which is somewhere similar to the crowdsourcing MVP test. It allows you to present the product in front of the customers with an aim to allure them to pay out for the product even before the creation of it.

For example, Oculus Rift is one of the best virtual reality gaming kits that launched a pre-order page before the beginning of its production for its development kit. After that, several projects start as pre-orders on Kickstarter. In this way, you can analyze the existing demand for your product that you are willing to develop. This test also gives you an indication about your project, whether to continue or discontinue.

Despite everything, there are some users who might not be willing to invest their valuable money on the product, which is about to launch or has already been introduced in the market. Therefore, the product’s presentation should be appealing and attractive. App developers create descriptions and mock-ups of the product for validation.

This is another efficient MVP testing strategy. Landing pages refers to those pages where you can showcase the core features of your product or brand and prompt the visitors to sign up. A landing page also plays an important role in showing you the interest of the potential customers by their way of behaving and interacting on the page.

While creating a landing page, you should always use analytics tools in order to track the visitors on your page. For example, analytics tools such as Google Analytics, CrazyEgg, KISSmetrics, and many such would be very helpful. Additionally, it is a fantastic way that allows you to test an MVP product against the expectations of the customers from the existing product in the market.

You can use Wireframes, prototypes, and Mockups in order to demonstrate the functionality of a product in an efficient way that impersonates the exact usage. These prototype minimum viable products vary from low-precision sketches to complicated “dummy” apps, which are responsible for showing the user experience as a demo.

With the help of combined wireframing and tools used for prototyping such as UXPin, you can express anything you are willing to develop and share your central ideas with the team transparently.

In order to take complete advantage of the videos for engaging your customers is a perfect way for testing a minimum viable product. You can make a short duration video explaining your MVP product to the target users. It is responsible for demonstrating to the customers how they will use the product and how it will be able to resolve their primitive points. This practice helps efficiently in increasing the number of users even before launching the product.

For example, Dropbox, which is an hassle free tool used for sharing files, is a faultless example who used explainer video in order to test their minimum viable product and succeeded at the end.

Piecemeal MVPs is one of the best MVP testing strategies that use a combined technology for creating a demo of the products through existing tools. Rather than investing your money and time into developing anything on your own, create a minimum viable product with the help of other existing services and platforms.

For example, Groupon is an ideal case of a piecemeal MVP. First, It was created on WordPress, AppleScript, and Apple Mail, which created manual PDFs because the orders were received from the website. Hence, the cost and effort of creating an MVP is affordable and worthwhile.

Ad Campaigns are another comprehensive tool for market research. Make sure that you use this tool perfectly for better results. Ad campaigns are quite similar to the landing pages. You can take complete advantage of social media channels with the help of ad campaigns for highly helpful analytics.

Running a campaign can help you in providing statistics such as conversions and click-through-rates that can prove to be valuable and important information for determining how your product will run and what it can be. With this MVP testing strategy, You can show the ads to your targeted audience as per their gender, age group, interests, and location.

Blogs also play an important role in testing your minimum viable product by validating your central ideas with your target audience with a minimum effort. A perfect blog must include two-way communication. Therefore, it is a great platform for building momentum and collecting the feedback of the customers in the development process of an MVP. Moreover, blogs are also responsible for serving as early prototypes of the product.

Another popular MVP testing strategy is Paper Prototypes, which is somewhere similar to Digital Prototypes, except the fact that these are physical. Physical prototypes are either paper sketches or made of cutouts for demonstrating your product and the product’s user experience. The primitive advantage of paper prototypes for testing a minimum viable product is that any member of your team can use it, from product managers, investors, end users, to graphic designers. Additionally, paper prototypes need very few explanations because it provides you an exact product representation.

What are the Advantages of Testing an MVP?

Testing a minimum viable product is advantageous and some of the major benefits of MVP testing are as follows:

Why is There a Need to Test the Minimum Viable Product?

It might be a risky idea to launch your product without testing the central idea of it. The tests result of an MVP and the feedback of the users play an important role in making you understand if it is worthwhile creating the project. After successful tests of your minimum viable product, you can get the following results:

Building and deploying an MVP is a flawless approach to test the central idea of a product in its initial phase. You can choose any of the MVP testing strategies that we have mentioned above or their combination to successfully test your minimum viable product according to the needs of a product. If you still face any issue, please feel free to contact 4 Way Technologies, a leading MVP testing services providing company.

What is an MVP?

What Are The Different MVP Testing Strategies?

What are the Advantages of Testing an MVP?

Why is There a Need to Test the Minimum Viable Product?