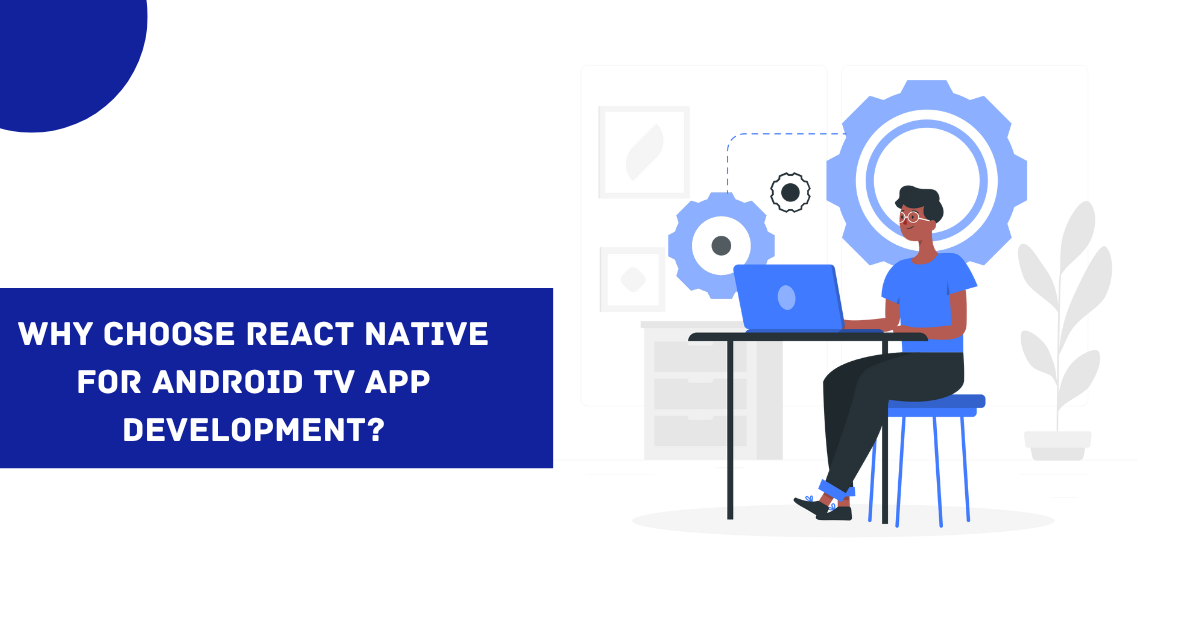 Provided the advancement in television technology, the market of Android TV has expanded remarkably. As far as monthly active android users are concerned, it has crossed 110 million in the first quarter of 2022. You must know that it is the smart interactive apps that make Android TV devices smart. This further raises concerns about the correct choice of the app development framework for android TV. Isn’t it?

So, in this article, we will discuss all the major reasons for choosing React Native; thereby supporting you to be an efficient android tv app developers.

Although the app development process of smart TVs like Android TV and mobile seems the same to you, there are some following differences that you should consider.

Either you build your app with a diverse range of device configurations which may increase the binary size of the final build or you have to take a distinct approach for mobile app and TV app. How smart the technology becomes, you cannot replace your smart mobile device with your smart TV. Right? So, the matter of difference lies within.

Initially, choosing Android is the best decision that you have ever made. With Android OS, you can get an unmatched user experience even on a large screen like that of television devices. This is also applicable to the high-definition screen of smart televisions. Thus, Android OS allows optimisation of apps as per device.

Even though you can use your existing knowledge of android app development to build an Android TV app, you have to focus on how differently users interact with a TV and a mobile phone.

Let us see some of the key criteria that you should note while developing an Android TV app.

With this, I meant to say that focus on developing apps particularly for TV users. The TV- based content mostly involves streaming live shows, movies, audio, news and playing games. Also, when the app is TV oriented, they should use less screens, simple and are easy to set up.

You need to keep in mind that users are on their TV or rather smart TVs for entertainment. So, focus on ensuring the consistency and intuitiveness of those apps. Besides, ensure that it shows a definite launcher icon in your TV launcher. The displays of the app should be 320 by 180px full-size banner. Also, if you are developing a gaming app or audio apps, create a distinct pathway to ensure that the apps show up on their related dashboard category.

Landscape orientation is a must in the case of TV apps. The display of the main text should not be less than 16sp. Besides, the average core text of an app needs to be at 12sp. When you are running an app, make sure that the background is non-transparent and it covers the screen.

Import WebView components for the web content. In the case of audio streaming TV apps, import a display of “Now Playing card” to let users return to the main screen of the app. For advertising use non full-screen, clickable and non video-ads to ensure that any pop-up ads does not directly take users to its web URL.

Now when we are done discussing the prime consideration in Android TV apps, lets see how React Native can be helpful in android TV app development.

With React Native, you can make changes in AndroidManifest.xml. This is the manifest file in which you can get the detailed information about the app, the Android build tools and the Operating System of Android. You can also access the JavaScript layer to make sure that the Android TV app is running properly based on the imported code.

While creating a TV app, React Native provides the flexibility of designing selectors, focus, and horizontal scrolling elements. What you need to prioritize is to be creative with your imagination while you are playing with React Native components, props, and states.

To create focus and navigation selectors, you have to use the TouchableHighlight component of React Native. It is a wrapper that makes <view> elements highly responsive.

Designing a proper layout for focus navigation can be a major challenge. With React Native, you will get the perfect solution for managing focus navigation. For instance, if you want to select an image for playing a specific TV show or movie, you have to use an RN component GalleryItem with a Text, View, and Image component. Also, you have to set the onFocus RN component to true while selecting or focusing on a particular image icon. onBlur components also play an important role in navigation selectors. On changing the state variable of onBlur to true, you can make a defined segment blurred. Both the onFocus and onBlur components increase the dynamism of the Android focus navigation.

You can import the ScrollView component into the code base and design it in a manner to allow your users to scroll horizontally. You simply have to use this <ScrollView horizontal style={styles.row}> in your code line to incorporate horizontal scrolling. Through this codeline, you will activate the horizontal prop, directing the ScrollView automatically to organise the defined child components in rows.

On using the touchable controls of React Native, you can direct the Android framework to use the directional navigation option. However, this is relative to the state of focusable elements in the views.

Also, you get the choice to make the ‘view’ button of the D-Pad remote control device more spontaneous.

Do you know that this interesting part is possible even with React Native. The fundamental concept that you should keep in mind is that you have to add relevant codebase to the Touchable mixin. Specifically you have to design your code with TouchableWithoutFeedback, TouchableNativeFeedback, TouchableOpacity and TouchableHighlight within the Touchable mixin. In the process, you will be able to detect changes in fous and design the RN components using existing methods.

While designing D-Pad control and setting up the event handlers of TV remotes, you will also require a native class of RN, ReactAndroidTVRootViewHelper.

As far as the focusable button is concerned, you cannot overlook the importance of the RN component TouchableOpacity. With a simple code line, you can import TouchableOpacity to focus certain icons or sections of an app.

What is TouchableOpacity in React Native? It is just an envelope that makes the response of views more prompt. The opacity is regulated by covering the children component in the Animated.View. You can decrease the opacity value of the wrapped view with onPress.

Besides, you also need to create a focus manager for these smart TV devices. You have to provide a reference point to every Focusable item. This reference point is based on React node, which allows you to focus next on the basis of navigational direction. Don’t confuse the Focusable component of React Native with some rendering component. It only enables focused-based ability. However, for this, you should define what rendering operations of its children prop.

React Native voice is one of the vital packages that you should definitely install. It is the “speech-to-text” library compatible only with Android Platform. Be it the mobile device or TV device, React Native supports microphone or voice option in both the devices.

This will create a pathway to impot microphone in the android TV app. After installing the package, you have to start the voice in a preferred language and hook it on the SpeechResultshandler. This will add the array of strings in the value establishing a better connection between users and the app engine.

You may or may not require this specification on your Android TV but getting this option on TV devices is a blessing for developers.

React Native Music Control package is another useful segment that can let you control and display media managing options on the app lock screen. Using this option, you can also define a music control section on the notification centre.

Here, you have to allow the permission android.permission.FOREGROUND_SERVICE under AndroidManifest.xml. This way you can run the music tv application in the background. With RN, you can also set the MainActivity to a single operation. For this, just change the state variable of launchMode to singleTask under the AndroidManifest.xml.

Also, if you want to activate the music controls, enable the setNowPlaying. In case you don’t want it, call resetNowPlaying().

You can find the developer menu on the ANdroid emulator. You need to access it through cmd-M. Give a long press on the fast-forward button or simply on the menu option of the TV remote. Same as that of your mobile Android device, don’t even think of shaking the TV. It will only be heavy on your pocket. The Dev support menu gives you permission while developing applications. Thus with a simple click, you can easily enable this option even on your android TV.

There is no doubt that React Native can be the best choice when you are in doubt which framework to choose for optimising your app performance.

Hope you have all your doubts cleared. So let's start your Android TV app developer journey with React Native.