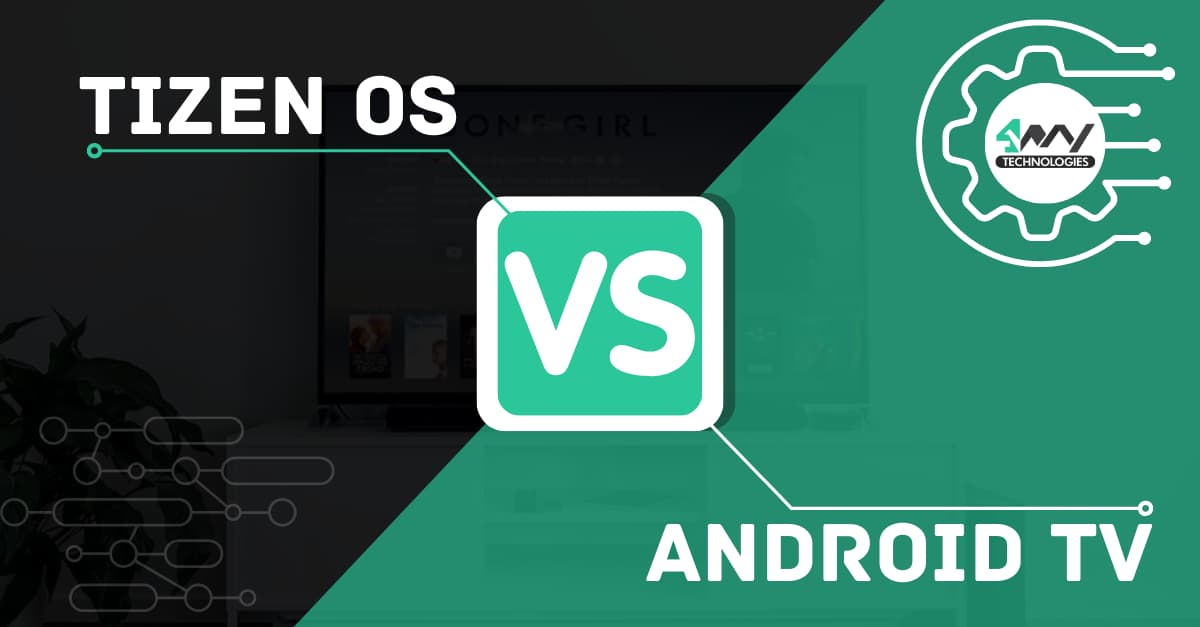 Due to Samsung's nearly 30% market share in Smart TVs, comparing its Tizen OS with Google's globally renowned Android OS is inevitable. Android powers a huge chunk of smart devices around the world, making it one of the most recognizable, and widespread operating systems at present, so what gives Tizen TV app development so high in demand? In this blog, we'll compare Tizen OS to Android TV. 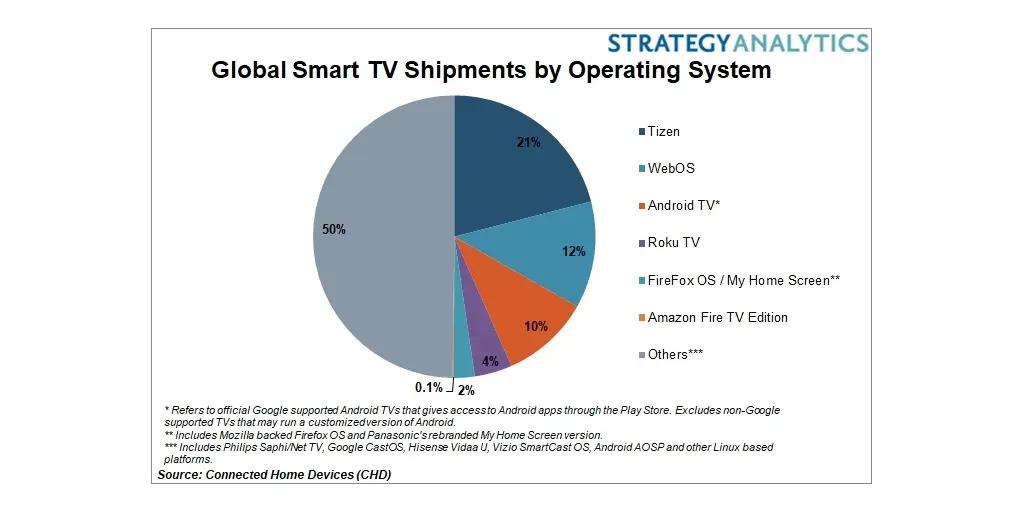 A Brief Overview of Tizen OS

Tizen OS is a Linux-based operating system developed by Samsung Electronics for the proprietary use of Samsung products, including Smart TVs and Wearables. In 2021, Samsung came into an agreement with Google to power their wearables with an Android-derived Wear OS, leaving Tizen OS solely for Samsung Smart TVs. Being a Unix-like platform written mainly in C, C++, and HTML5, Tizen OS is broadly different from Android and does not support any apps developed for Android. As a result, if you are looking forward to reaching out to a major percentage of Smart TV users through a Smart TV app, you are very likely to have to develop a Tizen app for your platform separately.

A Brief Overview of Android TV

Android TV was developed by Google in 2014, a year before Tizen was released. It is primarily an operating system meant for Smart TVs, as well as for integrating set-top boxes and digital media players into web-based TV devices. Android TV OS is entirely Android-derived. It has been adopted by several leading Smart TV manufacturers like Sony to act as a Smart TV middle middleware for their devices. It is an HTML/CSS/JavaScript-based operating system that runs of APK package manager via Google Play.

Samsung is particularly well-known for providing enhanced user experience. A major reason behind Samsung’s success in the Smart TV market is owed to the brilliant UX offered by Tizen. Setting aside the immersive video and audio quality that comes with Samsung Smart TV hardware, Tizen OS is well-equipped to make the most use of the state-of-the-art hardware of Samsung to provide users with a never-before TV experience.

In simpler terms, Tizen OS is streamlined for TV use, a feature that Android TV is yet to incorporate. Samsung Smart TV users, including myself, would be able to confirm that Tizen provides a more TV-like experience than Android TV. Let me break this point a little further. Remember the good old days of cable, or DTH-supported TVs? We had live channels and we could scroll through them at our leisure and stick to one that we liked. Tizen OS recreates that experience in Samsung Smart TVs. True, Smart TVs are web-based with apps instead of TV channels streaming live video or SVOD. However, you can scroll through these apps as if they are channels. The menu bar in Tizen OS covers merely 40% of the screen enabling an old-school TV channel surfing experience for the users.

Android TV, in my opinion, poses the Smart TV as just another streaming device, like your smartphone or tablet. Consider it as an oversized, wall-mounted tablet. It does allow certain features like gaming and screen-casting (powered by Chromecast) to be more user-friendly in Android TV-powered Smart TVs, but it does take away a bit of the traditional TV experience that we are all used to.

Android TV comes with an in-built Google Voice Assistant. Let’s face it, most of us have already used Google Assistant and know that it is definitely one of the best-in-class voice assistant AI technology available. It has a deep database with nearly flawless voice recognition. As a result, the voice assistant feature in Android TV could be considered quite adequate.

There is a caveat for Tizen here though. In Android TV, you can search for specific content using Google Assistant, but Tizen only allows you to search apps or channels. This is definitely a bit of a bummer as you cannot simply utter the name of a movie and access it directly from your Tizen device. However, also note that Android TV prioritizes proprietary Google app content like Youtube or Google Play Movies in their search results.

Tizen offers a more laid-out search bar with an efficient Guide feature that makes navigation rather straightforward in Tizen devices. Navigation in Android TV is not as easy, especially with all the unsorted options and a Google-centric search.

Tizen OS can be considered quite ahead of Android TV in terms of technical architecture. To begin with, Tizen offers a 64-bit processor which is yet to be offered by Android TV. This naturally makes Tizen OS perform a lot better than Android TV. Certain features like smooth scrolling, app start-up, and shuffling across dynamic app interfaces are much smoother on Tizen-supported Smart TVs in comparison to Android TV.

Tizen apps are also quite lean-sized without compromising on the audio-video quality. Both Tizen and Android allow automatic updates of firmware which takes away the hassle of manual updates and configuration. However, Tizen also automatically tethers to accessory devices, a feature unavailable in Android TV.

In terms of app support, Android TV definitely gets a point over Tizen. Android TV supports the thousands of apps available in the Google Playstore, giving you a myriad of app choices. In comparison, the Tizen Appstore has a limited number of apps. All Tizen apps are also free to install, while Android TV offers a choice of both free and buyable apps from the Playstore.

Android TV, however, has an advanced auto-suggestion system that configures itself to your choices over time and can provide you with pretty good content suggestions, albeit the suggestions are a little off in the beginning. Auto-suggestion is nowhere near as advanced in Tizen OS. To make things worse, Tizen does not allow you to easily access your recently used apps, a feature available on Android TV.

Tizen OS is definitely not meant for gaming. While Android TV has the potential to easily convert your Smart TV device into a gaming console, Tizen OS, at its very best, can make your Smart TV feel like a large smartphone. Tizen offers about 60 games. These are simple, mobile-friendly games with a retro touch. Android TV, on the other hand, supports thousands of games, some of which are highly immersive video games with advanced picture quality and gaming controls. Nevertheless, given that Android TV does have a processor as good as Tizen’s, the gaming potential of Android TV devices is largely limited.

Samsung is primarily an electronics company and naturally, a lot of its attention is focused on good hardware. Tizen OS merely makes good use of the best-in-class Samsung hardware to produce an immersive TV experience for their Smart TV viewers. In comparison, Android TV is not that focused on delivering a good TV experience, but a leading streaming experience. Ultimately, users have got to make their choice based on the kind of experience they are looking for from their Smart TV devices. Both Tizen and Android TV are technologically sound and hold great potential in their focussed areas shortly. The market share of the two OS is not the only parameter to decide their quality. Based on future upgrades, the number of Samsung consumers vs Android consumers for Smart TVs can fluctuate drastically.

A Brief Overview of Tizen OS

A Brief Overview of Android TV