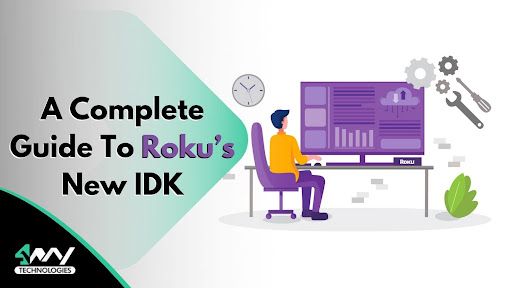 4 Way Technologies is one of the leading Roku Application Development companies across the globe. We provide comprehensive end-to-end software services and help various media-centric and networking companies in developing applications for various OTT platforms.

As we know that the demand for Smart TV app development is increasing day by day, publishing and creating your own Roku channel is a smart move. Publishing your ROKU channel isn’t tough at all, thanks to the ROKU development team for introducing such an amazing SDK and now this newly launched IDK.

But, mind you publishing does require a few things of the channel such as its source code, images, and fonts all to be “packaged” into a bundle that gets ciphered. By means of this feature, ROKU developers can publish their channels while keeping all their data safely encrypted.

Roku has recently launched an independent developer kit (IDK) which is responsible for allowing the Roku developers to enhance the Roku’s operating system utility and expediting more innovation throughout the entire platform.

This newly launched IDK of Roku will help the developers in experimenting and customizing their devices in personal-use capacities. According to Roku officials, this independent developer kit will be leading to innovation around Internet-of-Things (IoT) apps. For instance, this IDK will help you in connecting a Roku device to the game development or a thermostat.

This blog is a complete guide to the newly launched Roku’s IDK, and will help you in understanding the comprehensive features and documentations of this IDK.

The new IDK launched by Roku is ideal with industry standards for streaming platforms, which is responsible for allowing customers to install the app packages on their devices. The Roku officials in their explanation informed that the Roku developers can use this IDK to code in their preferred programming language such as C, C++, Python, JavaScript, and more. Also, this new IDK will allow you as a developer to create a number of apps ranging from games to news aggregators.

Important! The applications created with the help of this newly launched IDK will certainly be limited to Roku streaming sticks only and will not support Roku TVs and streambars. Also, these Roku sticks must be running on Roku OS 10.5 or higher operating system.

Roku also further clarified that its legacy SKD will continue to remain the primitive kit for channel development for commercial apps, which you can access via the app store of the device.

Additionally, Roku has also launched a new feature – beta channel feature, which will be responsible for providing the developers with enhanced visibility into the performance of their channel while testing. Developer accounts are allowed to test two beta channels simultaneously, and each beta channel includes a testing period of 120 days in order to make it available for the public.

Further Roku also clarified that non-certified channels will be removed from its platform by March 2022. The Roku IDK and beta channel feature is also responsible for facilitating great innovation, improving the testing of beta, and offering an intuitive development experience. Also, it educates that the development process across streaming platforms is more standardized.

What Are The Types of Apps You Can Build Using The New IDK?

The new IDK launched by Roku permits the developers to code in their preferred programming language in order to build applications beyond streaming channels. For instance, programmers can create apps in JavaScript that turn their TV screens into a snapshot view of their weather, traffic conditions, daily news, calendar appointments, and much more by pulling the data together from several sources. Roku developers can also use C/C++ for creating interactive and fun games, which requires the Roku remote control, smart home apps, and various other utilities and tools.

How Is Roku’s New IDK Different From The Legacy SDK?

The applications built using this new IDK are written in C/C++ programming languages and feature real-time 3D graphics as well. Also, this IDK is responsible for building a simplified build system in order to design gaming and other types of applications.

The IDK needs an understanding of calling APIs and GLES2, which can interface easily with the Roku hardware. The Roku SceneGraph language and SDK abstract the complexities, which are responsible for enabling the programmers to focus more on creating high-performance, robust, and intuitive streaming channel apps.

How To Develop Roku Apps Using Its New IDK?

The Roku IDK is a development platform, which is non-commercial and used for creating applications for personal use. These apps can be sideloaded and run on the Roku streaming player that supports IDK.

The IDK possesses a lot of features such as real-time 3D graphics with OpenGL ES, low-level hooks into the Roku OS with a tiny subset of media APIs, an easier build system, and standard OSS shared libraries.

Programmers and enthusiasts are allowed to use C/C++ or any other programming languages such as Python, JavaScript, and more in order to deliver impeccable projects. For instance, you can use the IDK in order to initiate interactive and casual games, which work with the help of Roku remote control or other smart home applications for monitoring and controlling the security systems, thermostats, and several other devices.

In order to create and run Roku IDK apps, here are the things that you must have:

Here are some of the steps that you need to follow in order to download the Roku’s new IDK:

1. Click this link in order to download the newly launched Roku’s IDK, which is provided as a tarball of approximately 165MB.

2. The next step is to extract the IDK.

3. Here are the root directories that the IDK includes:

You should also read about the process of Rendezvous linking registration.

How To Explore the IDK sample apps?

The samples folder is located in the root directory of IDK and includes a trail of sample apps, which are responsible for demonstrating the primary aspects in the personal-use application development. Additionally, these samples act like templates for developers, who are willing to explore and configure these samples as per the needed functionality of their apps.

Some of the IDK samples are as follows:

Every sample contains a makefile, which is used in order to generate a squashfs.bin file that you can sideload on the Roku streaming player that supports the IDK. For packaging a sample IDK app, you need to open a terminal app on a Linux workstation. After this, change the directory to the sample in order to be packaged, and in the end enter make.

While creating an IDK application, it requires the resources’ organizations and the application’s code into the required directory structure and then with the help of the easier build system in order to generate the binary file of the application.

Here is the directory structure that every IDK app must have its directories and files organized into:

Roku programmers can generate a makefile in order to simplify the creation of the binary file for the IDK app, which is then sideloaded on the Roku player.

The samples/common offers two makefiles in order to demonstrate this easier build system (the gles2, sfx, and remote samples all use this). This folder also contains the splash screen assets and icon, which are used to identify the application on the Roku player’s home screen and at the time of app launching.

Here are the assets and makefiles, which are used in the sample IDK applications in order to create an IDK application with the help of simplified build system:

The following variables must be included into the makefile in order to use the simplified build system for generating a binary file for your IDK application:

How To Run The IDK Applications?

IDK apps can be run and sideloaded on IDK-supported Roku streaming players. Follow the below steps in order to sideload an IDK app:

1. Firstly, Enable developer mode on your Roku streaming player that must support IDK.

2. Now, open the Development Application Installer, and upload the binary file, which contains your IDK app to your Roku streaming player. If you are sideloading a different IDK app rather than the currently installed one, delete the existing IDK app on the device first in order to delete the non-volatile memory used by it.

3. The final step is to test the IDK app on your Roku streaming player.

Alas! We are done.

We hope you will find this article helpful. After going through this blog, you will be able to grab some important and key factors regarding the newly launched independent developer kit (IDK) by Roku. If you have enough interest in Roku channel development, you must go through this guide even if you are on a beginner level. If you still face any issues, you may use the Roku IDK developer forum to ask for your queries related to Roku app development.

What Are The Types of Apps You Can Build Using The New IDK?

How Is Roku’s New IDK Different From The Legacy SDK?

How To Develop Roku Apps Using Its New IDK?

How To Explore the IDK sample apps?

How To Run The IDK Applications?