ReactJS vs Angular: Which is Better? 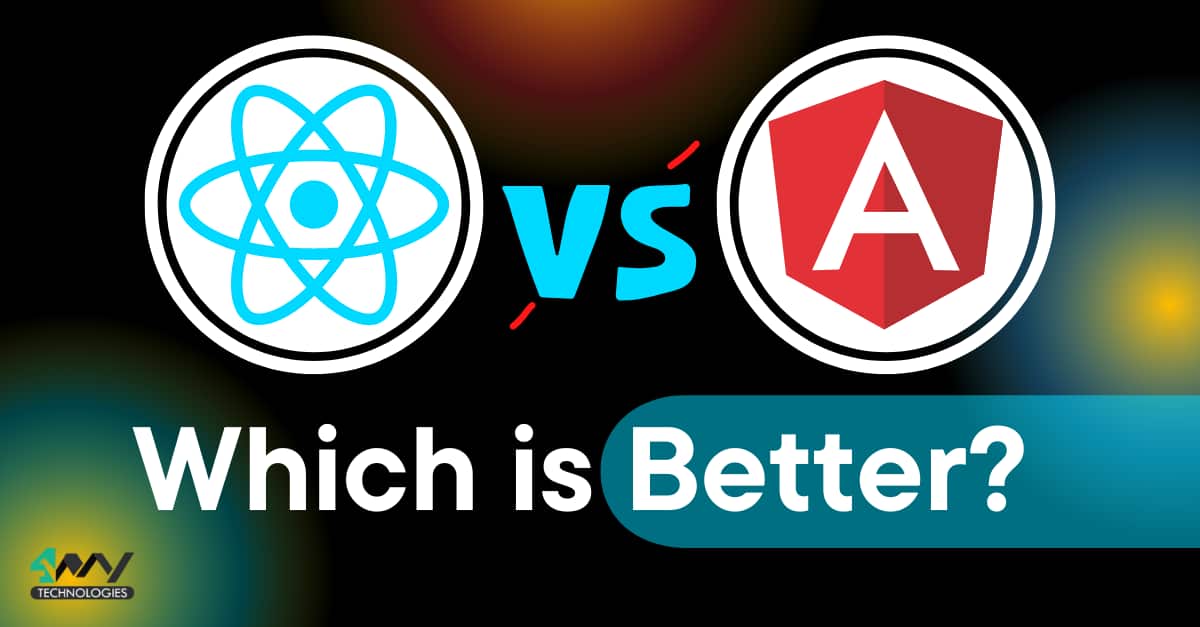 ReactJS and Angular are two leading front-end development libraries for mobile and web applications. They are both based on Java and popular for building robust, scalable, and intuitive frontends for applications. Although Angular has remained a top choice among developers for years, ReactJS is steeply gaining mileage over Angular in 2022 creating a high demand for any React app development company. Let us compare the two libraries to find out which is better. 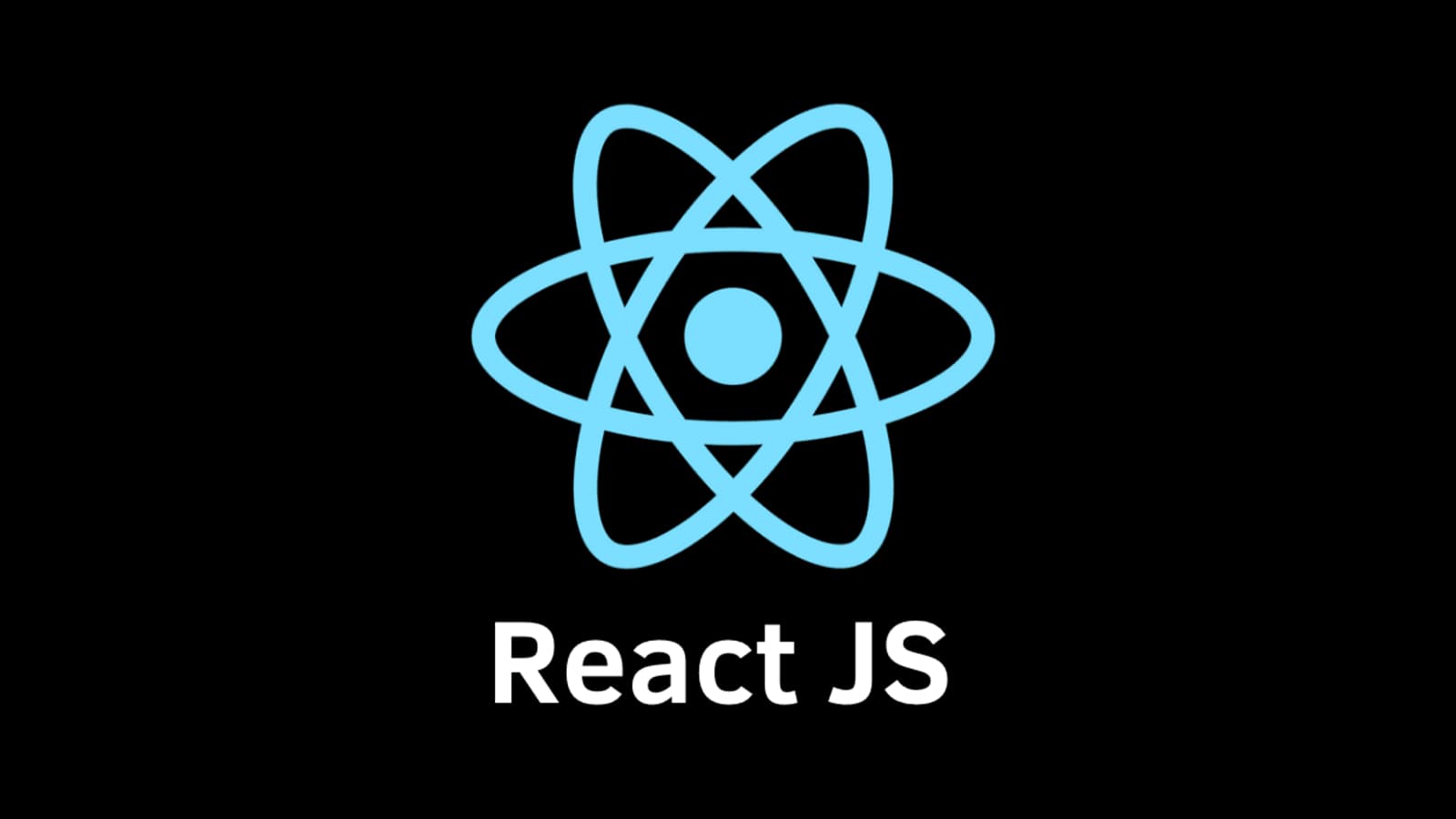 ReactJS is a JavaScript based open-source front end development library hosted by Meta (previously Facebook). Launched in 2013, post its development by Jordan Walke, ReactJS has quickly occupied a leading status for mobile and web application development. ReactJS is all about simplicity, ease-of-use, and performance enhancement. Several novel features supporting this goal of React have gained the library its popularity. 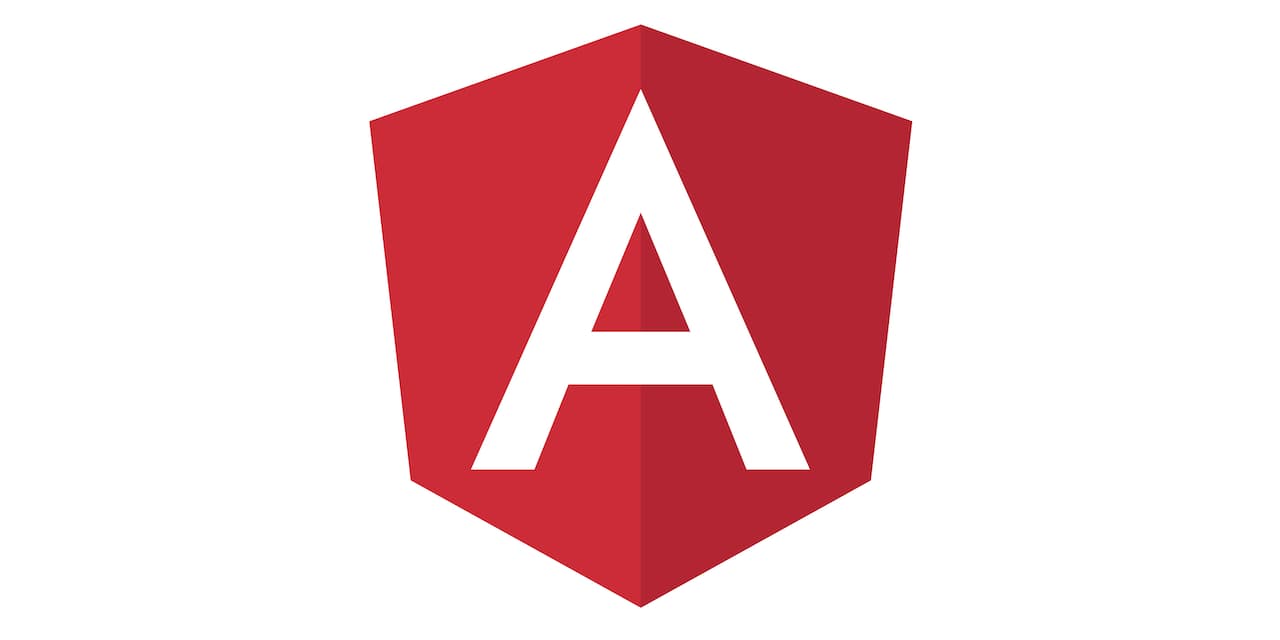 Angular, or Angular+ is a frontend framework developed by Google, launched in 2016. It is quite different from its predecessor, AngularJS. Angular is an open-source framework maintained by the Angular Team in Google along with some corporations. Although it is commonly said that Angular is a JS based framework, it is actually based on TypeScript, a syntactical superset of JS. Considering the launch of AngularJS in 2010, Angular+ has spent over a decade in the frontend development industry, and it continues to enjoy a leading status till this day.

Let us quickly review the common cases where ReactJS and Angular are used! 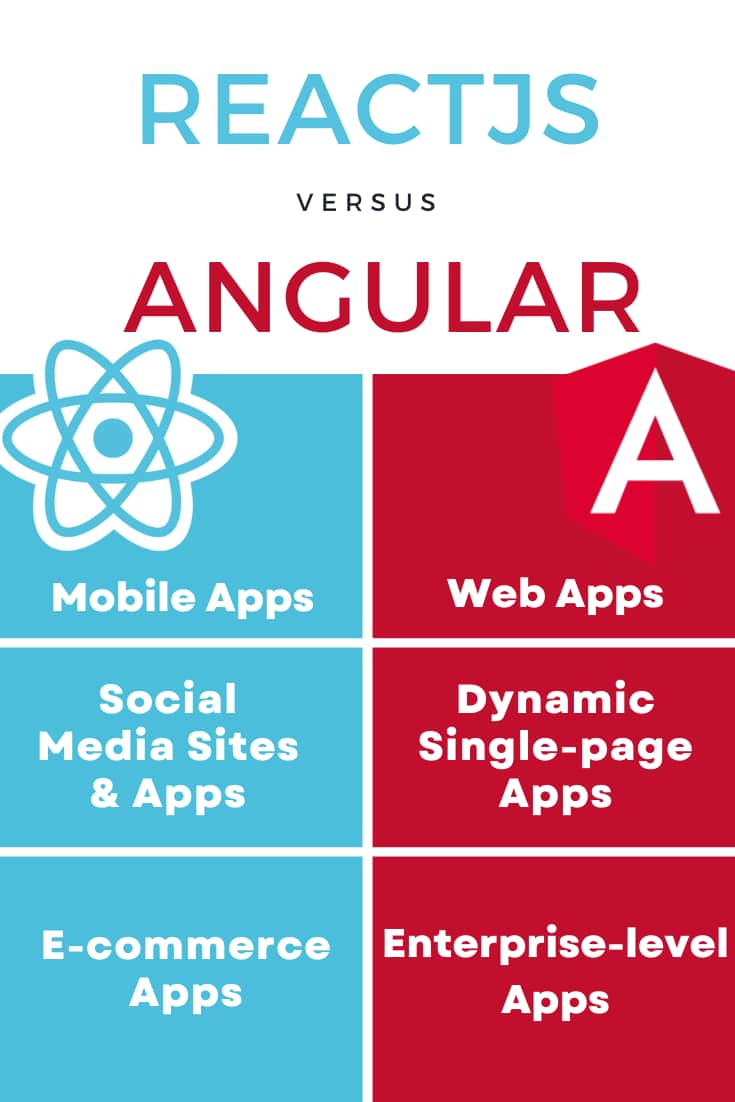 Let us compare ReactJS and Angular based on various parameters in this section to see which could be better for your projects.

In terms of popularity, ReactJS has presently surpassed Angular. A recent Stackoverflow survey suggests that ReactJS is the second most beloved library of developers in 2022, after Node.js. The same survey throws Angular at the fifth position with jQuery and Express before it. Nevertheless, Angular enjoyed more popularity than ReactJS until the previous year. Angular offers more accessible solutions and troubleshooting while ReactJS faces issues of limited contributions. Although, this problem is fast disappearing owing to the large community supporting ReactJS and increased collaboration efforts. As we will discuss shortly, community support for ReactJS is much larger than Angular.

ReactJS creates a composite overview by integrating smaller components into larger ones. Every object in this library functions as a separate, autonomous unit with its own logic. As a result, modifications introduced in one component do not affect the other components. Additionally, ReactJS makes it simple to handle updates and allows developers to simply reuse the elements, saving a huge amount of time and resources and hastening time-to-market. By extending the use of HTML to web application development codes, Angular lessens the skill requirement. Additionally, Angular provides easy development that is seamless.

Angular arguably has a more sophisticated architecture. While ReactJS needs to be supported by other libraries for the implementation of certain features, the MVVM architecture of Angular allows the framework to have these features inbuilt. In ReactJS, we need to import libraries like Redux or Flux as controllers, which is not required in Angular. The react-router framework is needed with ReactJS for navigation.

MVVM or Model-View-View-Model forms the foundation of Angular. It has an extensive variety of benefits, including change detection, data link, routing, forms, and HTTP implementation, among others.

Considering that ReactJS is open-source, it already forms a large difference between ReactJS and Angular.To achieve a comparable list of advantages, one must therefore use third-party component libraries. Forcing unidirectional flows, calling APIs, setting up tests, managing dependencies, as well as other tasks all, require the addition of "routing" elements.

A lot of native features and possibilities are offered by the Angular framework. One may begin a task more quickly without feeling overwhelmed by the decision-making process because it enables them to instantly profit from a wide range of possibilities.

If we compare the performance of ReactJS and Angular apps from a client-side perspective, ReactJS is better performing. Components can be added to ReactJS's own virtual DOM. It makes the browsing experience more comfortable because all the data appears without having to reload the webpage. This makes UI components move faster and also more fluidly on the screen. A characteristic of MVVM in Angular is that it significantly slows down how quickly website content renders. Additionally, the transmission is occurring in asynchronous mode, as a result, the amount of server entrances is decreased. A portion of the back-end queries is dropped because the user experience is client-side. Web app design becomes faster as a result. Especially on sophisticated and interactive apps, Angular has poor performance. Additionally, virtual DOM allows ReactJS apps to respond quicker compared to Angular apps for apps of comparable complexity.

This is one of the key areas where Angular and ReactJS are contrasted. Dependency injection refers to a pattern of software design that aids in the reuse, maintenance, and testability of components.

Angular provides standard directives for DOM handling. Among the default directives using it are ng-bind and ng-app. Furthermore, you also can write custom directives. One of the easiest and most effective techniques to deal with the DOM is thought to be this method. In addition, to conclude, we might bind DOM components with Angular apps by using both standard directives as well as specialized directives. On the other hand, no separation between directives, templates, or template logic is provided by React. It is necessary to include the template logic within the template itself. Every time an event takes place, React decides to perform a reinterpretation of all templates and the UI at every event.

Data binding is dealt with in completely different manners in ReactJS and Angular. One-way binding is found in ReactJS. It gives our applications unique behavior. The use of dependencies reduces the likelihood of errors and aids in the singularity's separation from the classes. Additionally, ReactJS's one-way data flow also aids in keeping complexity under control. As a result, in complex ReactJS apps, debugging becomes a much easier task in comparison to debugging complex Angular apps.

Angular ties the Document Object Model (DOM) variables to model data using a two-way data binding technique. This implies that if the application receives an updated value as a consequence of user input with the element, both the display as well as the object will be updated. Incorporating the exchanges between the components in our applications also makes it easier to develop a large amount of code. The two-way data binding method, unfortunately, has a detrimental effect on performance.

The ease of testing of codes is comparably similar in ReactJS and Angular. ReactJS often heavily relies on external libraries like Redux for testing. Nevertheless, testing is quite seamless and effective through Redux. The addition of features like React Jest has further eased testing in ReactJS apps. On the other hand, Angular has inbuilt testing tools and dependency injections that automatically test your code.

Migration is arguably simpler in Angular in comparison to ReactJS. Even though it depends on other libraries to modify and migrate the third-party components, ReactJS enables smooth transition. However, some opine that it is a laborious and time-consuming effort for the developers to continually examine third-party libraries to make sure they are compatible with the most recent versions. Angular Includes an improved command line interface (CLI) featuring built-in commands that make updating the application to the most recent version simple. Additionally, the process of development is less laborious and time-taking as updates are automated.

ReactJS is considered much easier to learn than any other framework. The library was conceived keeping in mind ease of use and a shorter learning curve. With extensive documentation, ReactJS makes app development a simpler task for beginners with comprehensive experience in JavaScript. Angular however, demands a much stronger grasp of JavaScript and is notoriously complex for beginners.

ReactJS enjoys the most extensive community support through GitHub and GitLab, especially because it is open-source. Angular also enjoys a fair amount of global community support owing to its long-standing popularity among frontend developers over the years.

To sum up, which is better?

There is no right way choosing one library or framework over another, especially when it comes to React and Angular. From the above discussion, it is prominent that the two libraries were created with somewhat different purposes in mind. Although they are both used for frontend development of applications, Angular is maintained to be better suited for large, enterprise-level web application projects. Meanwhile, ReactJS was created to build fast, responsive mobile apps.

You might want to choose ReactJS if your applications involve a large amount of data, like social media apps or e-commerce apps. Moreover, if you are expecting continuous further expansion of features in your app, ReactJS should be more suitable for you. Angular is a more holistic framework that would help you build robust, large-scale projects.

Lastly, the choice of framework also depends on you, the developer. Each developer finds one framework more comfortable to use over another. Now that you’re filled in with the features of Angular and React in depth, get out there, try them and pick your winner!

To sum up, which is better?