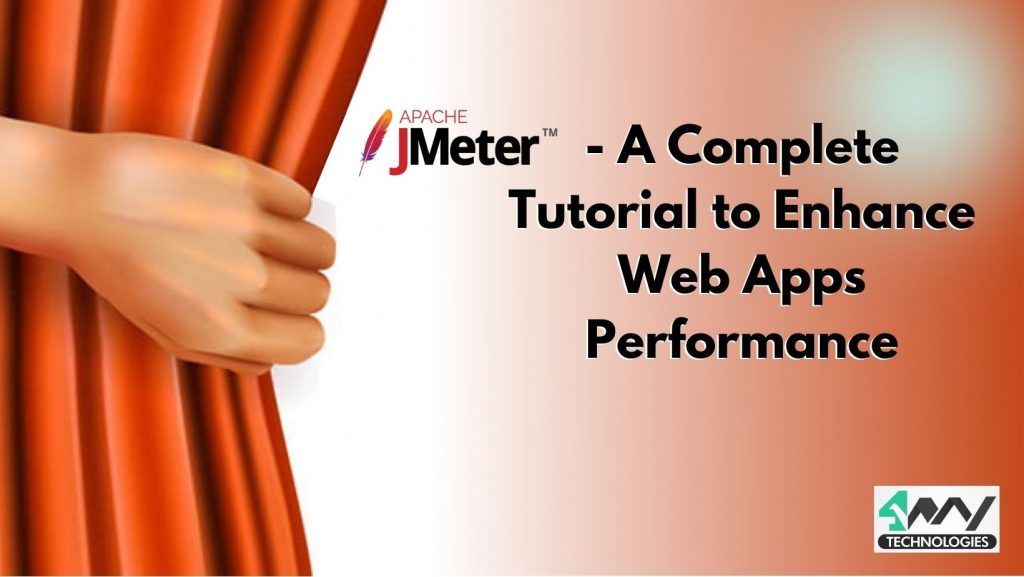 While creating applications, one thing is very important to keep in mind is to know the status of app’s performance under enormous workloads. Performance software testing helps you in determining the stability and responsiveness of an application in a number of scenarios.

Apache JMeter is one of the great resources used for application performance testing across the world. JMeter is a complete Java application and an open-source testing tool, which is responsible for measuring the performance and load-testing the functional behavior of the applications.

In this article, we have comprehensively introduced JMeter and how it can be utilized to enhance the performance of your web apps.

So, let us start!

JMeter is used for simulating a heavy load to analyze and test the strength of the entire performance of an application under several load types. JMeter is capable of testing the static and dynamic application resources with ease. Now, you would be eager to know more about these resources.

Don’t worry! This blog will provide you with the complete solution to all your queries.

JMeter does Load app testing and Stress app testing out of four main types of performance testing available in the market.

Let us understand these testing processes:

Apache JMeter is a software testing tool, which is used to measure and analyze the performance of enormous software services and products. It is an open-source tool and comprehensively written in Java which is also used for testing the FTP application or Web Application.

It is also used for executing performance testing, functional testing, and load testing of web applications. JMeter was originally designed to test the web apps but now it has been extended to test other functions as well.

JMeter can run on any workstation or environment that accepts a Java Virtual Machine (JVM), for example − Linux, Windows, Mac, etc. Additionally, JMeter can also simulate a heavy load on a server by creating a number of virtual concurrent users to the web server.

Here are some terms associated to the testing of applications:

What are the Key Features of JMeter?

What are the Protocols that JMeter Supports?

Several protocols that are supported by JMeter are as follows:

JMeter simulates the group of users sending the requests to a target server, and returns statistics, which shows the functionality & performance of the target application or server via graphs, tables, etc.

Now, let us further understand these steps in detail.

In order to create a thread group, follow the steps given below: 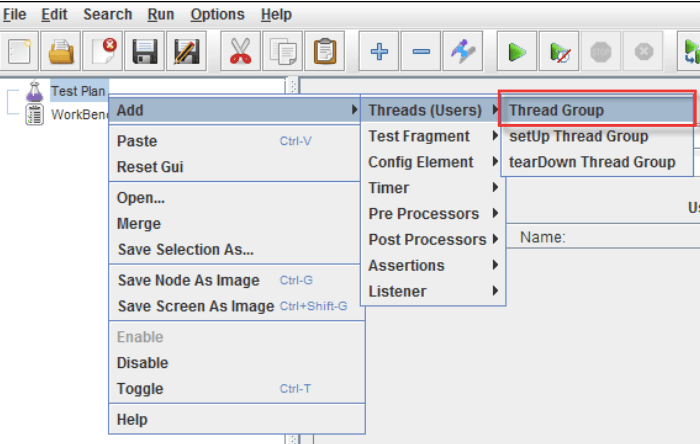 According to the above mentioned diagram, JMeter is creating 100 concurrent users. These users are accessing the web service all in one single time. We have set the Loop Count to 10. Therefore, every user made by JMeter is connected to the server 10 times.

Congratulations! You have successfully created a Thread and also added its properties.

Below is the example how to add the JMeter element:

Follow the below given steps to add this JMeter element.

The below image shows the process how to add this JMeter element:

Suppose you do not enter any parameter in the Path field, then, in this case, the user will only request www.google.com. There is no need to specify Google here as it is specified already in the HTTP Request Defaults item.

JMeter is a very efficient and powerful tool that shows the results in a graphical format.

After setting up the basic test plan, it is time to run it and analyze the results.

Follow the below steps in order to run the test. 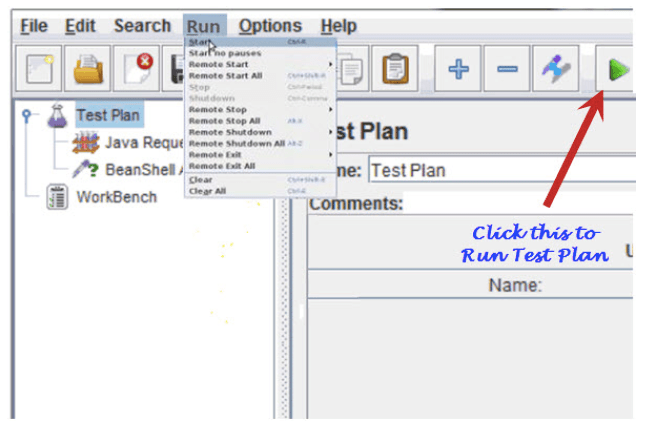 As the test is run, the results appear in the table in real-time. In our example case, 100 users would be accessing the Google server simultaneously, with every user connecting to the server 10 times.

After carefully analyzing the real time graph. There are two main factors that you need to consider:

Important! Throughput also depends on various other factors like the internet speed, the current load of Google’s server, and power of the CPU. These factors change continuously, which means you would not get the similar results every time you start and run the test.

The output report in this scenario comes in five colors, and every color defines something different:

Blue – It signifies the average of the total number of samples sent to the server.

What is the Importance of Performance Testing?

JMeter is responsible for doing both stress and load testing. Load testing models simulate concurrent users. However, stress testing models determine the maximum load that a web server can handle. These test results help you in reducing the bottlenecks and boosting the performance.

Testing is the most valuable part of any software development process. We have only explained JMeter in this article, but there are a number of automated QA software testing solutions available in the market. Choose your development partner wisely in order to help your business cruise testing nuances for ensuring the application offers users with an impeccable user experience.

Thus, after going through the above mentioned article, we hope you will find it helpful. Here we understand that testing is the most critical part of any software development process. Performance testing is a vital step to determine the performance of your web apps under heavy loads. JMeter is an ideal tool for performance testing, as it has the ability to discover various users that your web app can handle.

What are the Key Features of JMeter?

What are the Protocols that JMeter Supports?

What is the Importance of Performance Testing?