How to become an iOS developer? 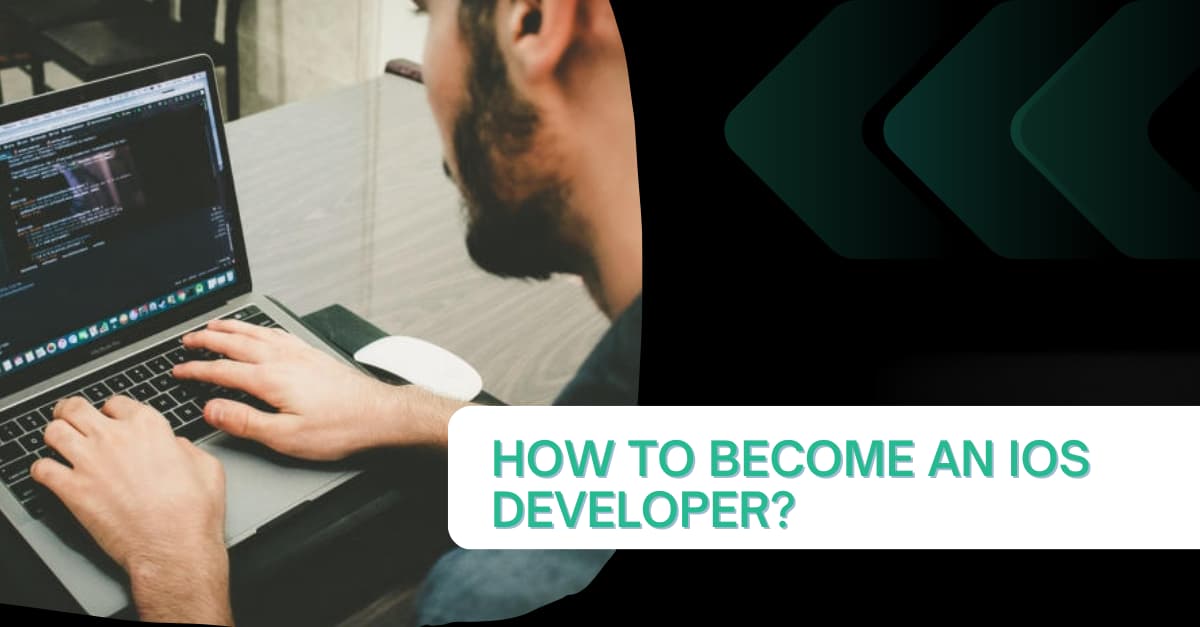 If you think that becoming an iOS developer is beyond your reach. Take 5 minutes out of your schedule to give this article a read. Trust me on this you will already create a mind map and start your iOS application development journey as soon as you complete this article. Precisely it will clarify all your doubts regarding iOS app development. Along with this, it will provide a proper timescale to guide you to target every milestone.

You must choose iOS development for the following reasons.

You should choose iOS development as your career because the population of iPhone users is increasing. You don’t have to trust my words. But I hope that global trends will rule out all of your doubts.

Refer to image 1 which shows the search interests of iPhone users across the globe. Given the demand for iPhone devices is increasing, this will eventually increase the demand for iOS developers like you. So your contribution to this segment may allow users to experience interactive iOS apps. Also, as per the surveys conducted by Statista, the brand Apple has a huge loyal consumer base, with its revenue growth on an unparalleled scale. From a mere 8 billion USD in 2004, the revenue reached more than 270 billion USD in 2020.

You may find difficulty in learning all the iOS app development skills but as soon as you start acquiring knowledge on this segment, there is no looking back. I can assure you that you can get more than you have expected if you succeed in showcasing both your hard and soft skills to your next employers.

As per Glassdoor, the average salary of an iOS app developer is $1,04,413 per annum. On the other hand, the average remuneration of an iOS mobile developer is $73,134. iOS Software Developer gets $99,906 per annum on an average scale. If you search on LinkedIn, you will find more than 28,000 vacancies hiring for iOS developers only in the United States. Even if you join as a fresher, the remuneration structure is worth your contributed time.

The learning curve of iOS development is definitely not as steep as you have thought. It is neither a cakewalk. You have to follow a defined path of learning skills step-by-step and you are done. Even if you have no experience and are willing to transition to a career in iOs development, you can. You have to become familiar with the Apple development environment, more precisely with that of Xcode, Objective-C, and Swift.

If you are a beginner, I would suggest you take iOS development courses from Udemy. In other cases, you can also start your self-assisted journey.

While you are on the journey of becoming an iOS developer, you should also become acquainted with the job responsibilities that you will be associated with.

What are the prerequisites that you should consider?

If you have shared your thoughts of transitioning into iOS developers with your colleagues or friends, you must have heard of the cliched response that you cannot be a developer if you don't have a computer science degree. I am not denying that a bachelor’s or master’s degree in computer science can take you a step ahead of others who belong to different academic backgrounds. Software development or coding is all about practice and a passion for the subject.

However, you should have a bachelor's degree in science or IT. A Master’s degree is not mandatory. You can get it if you want. However, I would suggest you gain some corporate experience in iOS development and then pursue a master in computer science. This will make the learning process more intriguing.

If you are from a different background other than computer science, I will recommend you to focus on learning relevant programming languages. I can vouch for you on this that employers will not ask you for academic degrees but will ask you for the projects that you have worked on.

Given the abundance of learning opportunities and resources available on the internet, you cannot give excuses for not having a traditional computer science degree. Let us see what soft and hard skills you should learn.

Since you have to engage with different teams such as the designing team and other developers, you cannot be argumentative. You have to be constructive in your response while presenting your thoughts or suggestions. Being smart in technical skills will not help you to survive the corporate culture. It would be rather smart if you can work in a cross-cultural team and get the work done.

Coachability refers to the skill of being flexible in receiving feedback and working on it for better performance. If you have joined a team of iOS developers as an intern, I will suggest that you gain the skill of coachability as soon as possible. Focus on learning and taking advice from your seniors.

Software or app development is all about providing solutions to a definite need. So, working continuously on software development skills is all about resourcefulness. No matter how much experience you have as an iOS developer, you will encounter unaccepted problems. Here lies the main concern: how you are going to deal with it. Being resourceful and finding appropriate solutions is all that matters.

It will be useless if you cannot communicate well and cannot explain your development process to your team, clients and supervisors. Both written and verbal communication skill sets are required for succeeding as an iOS developer.

Concurrency is a state in programming where more than two operations are defined and executed independently. Since 2011, iPhone developers can execute multiple tasks in all the iPhone models.

You don't have to excel in multi-thread programming. However, you must know the fundamentals. This will help you understand the logic behind the code and detect errors if any. Thus it is necessary to learn the difference between background threads and main threads to conduct tasks such as networking, data fetching, and updating the UI.

If you are building iOS apps, a fair knowledge of swift is what you cannot skip. With the term ‘fair knowledge', I mean to say that you should acquire knowledge on the baseline working process to write swift code. As far as more complicated concepts in swift such as generics and automatic reference counting are concerned, I would suggest you go through the theoretical part of these concepts even if you are not using them in your daily coding practice.

As a beginner, this will help you to read code and understand the logic behind the scenes. You will be able to review your member’s code.

Xcode is the toolset that developers use to create apps for Apple TV, Apple Watch, iPad, iPhone, and Mac. Thus to become an iOS developer, you should know how to use and navigate XCode. Along this, learn about the basic debugging tools like setting breakpoints, stepping through your code, and using the console window. Acquire knowledge on measuring app performance, and creating and running test cases using the tools of Xcode.

Software design patterns are the solutions that developers implement to recurring architectural problems. While developing apps, you may encounter a problem that you have already come across in the past. Knowing the logic of design patterns will help you to solve the issue in no time.

It is most important to know the common ones like singleton factories. The other necessary concept that you should learn is algorithms. It will help you solve things that occur during the programming process. In interviews, it is possible that you will be asked about sorting algorithms and big o notation.

I won't ask you to get in-depth but get a basic knowledge of what it is and get some practical knowledge of how to evaluate your code.

There are hardly any apps that are not connected to some services. This is why you should get familiar with concepts like the difference between synchronous and asynchronous, HTTP and HTTPS and you also need to learn how to work with APIs. Since APIs and JSON are interrelated, for data interchange, you need to know how to decode and encode JSON with swift.

Keep in mind that every APIs is different from one another. So in the beginning, it would be more than enough to learn about some of the APIs and you will get your hands on them with others as you improve as an iOS developer.

The UI framework that you should learn will be based on the kind of responsibilities that you will be given. There is a lot of scope for developers who already know the fundamentals of UI kit. You can also learn about the workflow of swift UI, which is expected to be the future of iOS. The employers that are hiring swift UI experienced candidates are highly innovative because they are more into consistent growth through adopting modern technologies.

When you are filling in some job applications for the role of iOS developer, it is likely that you will work as one of the members of a large team. In this regard, source control is the way to work in peace with other members.

The VC (Version Control) system allows the software team to handle the source code by detecting errors during code modifications. This system will also let you keep the source code secure from random human error.

Even if you are working single-handedly on an iOS-based project, using version control can be helpful. For instance, let’s say you are a beginner and while building apps, you unintendedly introduce bugs. Using version control will help you go back to some commits and cross-check at what point you have introduced the bugs. This will give you more clarity on building apps and emerge as a responsible developer.

How long will it take you to be an iOS developer?

Although the time period can vary from person to person based on their passion for the subject, dedication, and commitment, it is not impossible to become an iOS developer. On average, it may take 1 year and 6 months to get the basic concepts of all the technical knowledge.

P.S. Without knowledge of database technology you won't be able to secure your position as an iOS developer. I don't believe it matters what you know as long as you cannot show valid proof of working with some databases. Every company works on distinct databases. If you can mention this learning and experience on your resume, you will get an upper hand over other job-seeking candidates. You can mention any works on databases such as cloud firestore. This is just a matter of validation that database concepts are not new to you and you can learn if you are introduced to some related concepts.

Knowing something is better than knowing nothing. Right?

Are you still with me looking for some piece of motivation? If the answer is yes, I have already started believing in your willpower and dedication to the subject. Get some belief in yourself and kickstart your journey toward a better future. This is just the first that is stopping you to get where you want to.

The demand of iPhone users

Salary scale and growth scope of an iOS developer

The learning curve of iOS development

What are the prerequisites that you should consider?

How long will it take you to be an iOS developer?