AWS vs Azure vs GCP 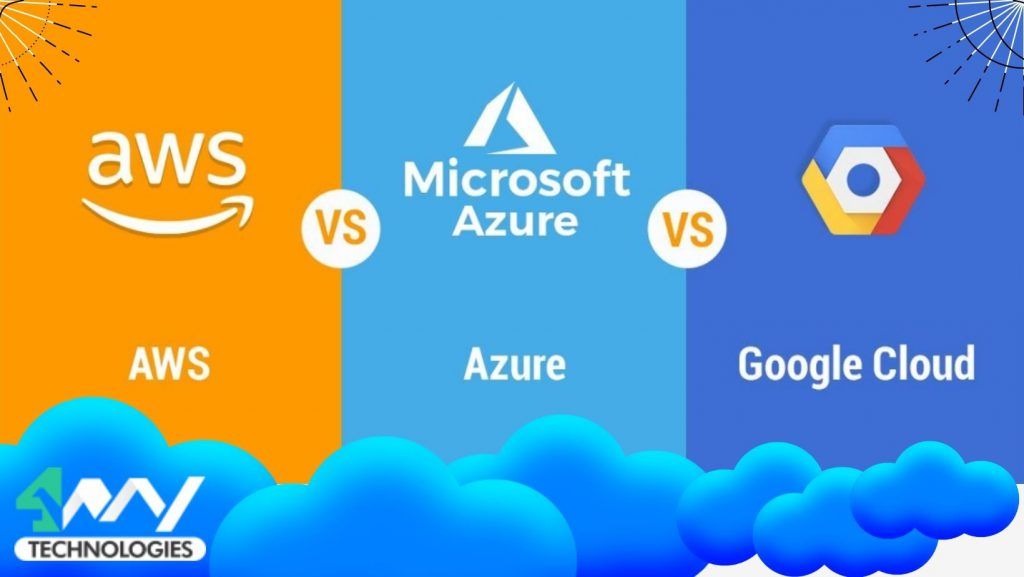 Cloud computing platforms have become one of the most preferable data storage solutions for several organizations as it eradicates the cost of managing and owning on-premise data centers. Cloud services are safe, reliable, and flexible.

Also, cloud providers offer on-demand computing resources and services in the cloud with pay-as-you-go pricing that helps organizations in saving money, which is why cloud migration services are increasing at a fast pace.

This article will provide you with an introduction to the big three cloud providers; Amazon Web Services (AWS), Microsoft Azure, and Google Cloud Platform (GCP) and will also help you in understanding the differences between them. 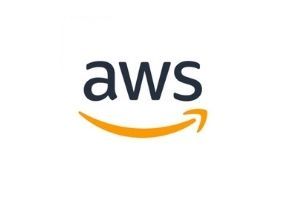 Amazon Web Services (AWS) is one of the most widely adopted cloud platforms that offer more than 250 services from a large number of data centers across the globe. AWS launched its cloud computing services in March 2006 offering on-demand APIs and cloud computing platforms to governments, companies, and individual developers on a pay-as-you-go basis.

What is Microsoft Azure? 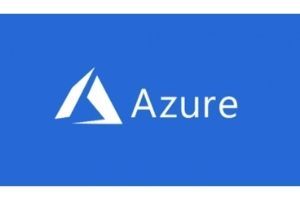 Microsoft Azure is a cloud computing service, which is a close competitor to Amazon Web Services with an impeccable cloud infrastructure. Azure was launched by Microsoft in February 2010 as Windows Azure and renamed Microsoft Azure in March 2014.

Azure is a cloud provider service that allows you to build, test, deploy, and manage services and applications through Microsoft-managed data centers. Azure also supports many different frameworks, development tools, and programming languages in order to develop applications as per your need.

Azure managed services include a large number of cloud services and products that have been designed in order to help you in bringing new and innovative ways to manage and run mobile and web applications with the frameworks and other development tools of your choice.

What is Google Cloud Platform? 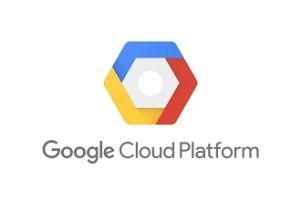 Google Cloud Platform (GCP) was launched in April 2008, which is a cloud computing platform that offers several public cloud computing services offered by Google. Google cloud managed services include a wide variety of hosted services for data storage, compute, machine learning, and application development, which run on the hardware provided by Google. 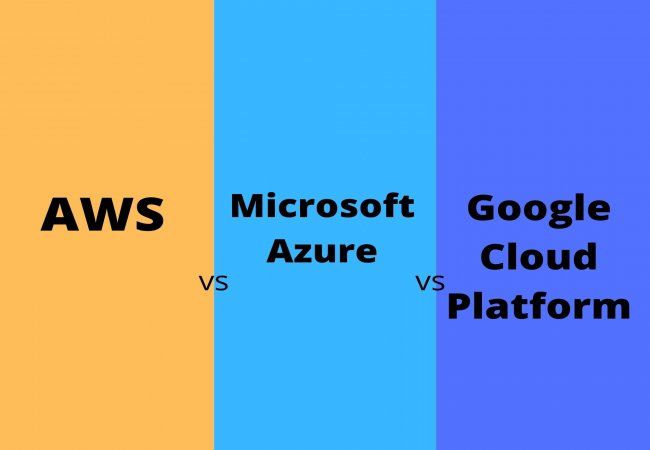 Amazon EC2 is a simple web service interface that enables you to securely compute in the cloud. It is a virtual computing environment, which is designed for developers in order to make web-scale computing more easy and resizable.

Amazon EC2 provides you with an excellent computing platform with the type of storage, processors, operating systems, networking, and purchase model of your choice. There are various instances provided by Amazon EC2 in order to build intuitive and scalable applications such as General Purpose, Compute Optimized, Memory Optimized, Accelerated Computing, and Storage Optimized instances.

AWS Elastic Beanstalk is a simple service that allows you to scale and deploy web and mobile applications developed with Python, Java, PHP, .NET, and more on familiar servers like IIS, Apache, etc. AWS Elastic Beanstalk simply requires you to upload the code and it automatically handles the deployment whether it is capacity provisioning, auto-scaling, or load balancing.

The primary cloud compute service provided by Microsoft Azure is known as Virtual Machines. It is no different from any physical computer and includes a large number of available instances, GPUs, and high-performance computing options. It also possesses instances optimized for machine learning and Artificial Intelligence (AI). Virtual Machine boasts support for Windows Server, Oracle, Linux, SQL Server, along with hybrid capabilities, enhanced security, and integrated support for Microsoft Software.

Azure Kubernetes Service is used most frequently by web app and mobile app developers since it became available in June 2018. AKS is a fully managed serverless Kubernetes service that allows you to manage and deploy containerized applications with ease. It also offers high-grade security and an integrated Continous Integration and Continous Delivery (CI/CD) experience to the developers.

Read also:-How to Develop a Real Estate Application Like Zillow and Trulia?

Google Kubernetes Engine is a cloud-based Kubernetes service offered by GCP that offers a managed environment to the developers in order to manage, scale, and deploy the containerized applications using the infrastructure provided by Google. The environment of GKE includes multiple Compute Engine instances, which are grouped together in order to form a cloud compute cluster.

So, if you want to choose the best cloud provider among AWS, Azure, and GCP when it comes to compute services, clearly AWS wins the battle with offering more than 250+ services. On the other hand, Microsoft Azure offers 100+ services whereas GCP offers 60+ services. However, Azure and GCP both are dedicated to the continuity of their expansion.

AWS vs Azure vs GCP Storage and Database Services Comparison

AWS offers Simple Storage Service (S3), which is an object storage service that provides enhanced security, data availability, impeccable scalability, and performance. S3 allows all the developers and organizations to store and protect enormous amounts of data for mobile applications, websites, data analytics, and more. One of the major features of S3 is that it can automatically create and store copies of all the S3 objects across various systems, which is why S3 possesses 99.999999999% of data durability.

Amazon Relational Database Service offers you an easy setup, operation, and scaling of a relational database in the cloud. RDS automatically processes time-consuming tasks like database setup, software patching, hardware provisioning, and backups in order to provide you resizable and cost-efficient compute capacity.

Google Cloud SQL is a fully-managed relational database service that provides you with the flexibility in order to set up database infrastructure after cloud application development. It also allows you to conveniently shift the existing databases running in SQL Server, MYSQL, or PostgreSQL BETA. It also ensures business continuity with secure and reliable services supervised and backed by a 24/7 SRE team.

After going through the storage and database services provided by Amazon Web Services, Microsoft Azure, and Google Cloud Platform, it is obvious that Amazon Simple Storage Service (S3) and Amazon RDS are better with tried and tested technology, extensive documentation, and large community support. However, Azure and GCP on the other hand, also provide reliable and secure storage services, but AWS is a clear winner when it comes to storage services.

Amazon Virtual Private Cloud is a networking service offered by AWS that allows you to launch AWS resources in a logically isolated virtual network defined by you. Amazon VPC gives you complete control over the virtual networking environment, which includes an IP address range of your own choice, the configuration of route tables, creation of subnets, and network gateways. VPC allows you to use both IPv4 and IPv6 for most of the resources in order to ensure easy and secure access to the applications.

Azure Virtual Network is a virtual networking service offered by Microsoft Azure, which is the fundamental building block for your private network. VNet enables various Azure resources like Azure Virtual Machines to communicate with each other securely, the on-premise networks, and the internet.

and other Google Cloud products created on Compute Engine VMs. One of the main features of Google VPC is that it can connect to on-premise networks with the help of Cloud interconnect attachments and Cloud VPN tunnels.

When it comes to networking services provided by AWS, Azure, and GCP, AWS is again way ahead of Azure and GCP with 213 edge locations in 90 cities across 47 countries. However, Microsoft Azure also has 116 edge locations across 100 metro cities and GCP has 146 Points-of-Presence (POP) across 61 metro cities.

So, when we talk about price comparison between AWS, Azure, and GCP, Google Cloud Platform wins this three-way battle here as Google Cloud also offers pay-per-second models, which allows you to save more than using Azure or AWS. Also, GCP offers deep discounts up to 50% in some exceptional cases as compared to AWS or Azure. 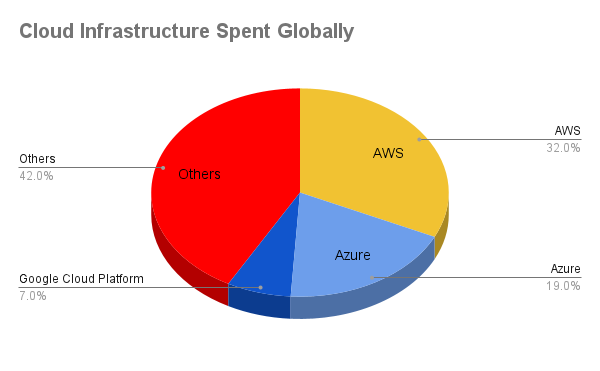 According to the reports of April 2021, the growth of the global Cloud market in this quarter has been reported up to 35% with a revenue generation of US$ 41.8 billion. Since AWS is the oldest in the Cloud market, it holds 32% of the total market share followed by Azure that holds 19% market shares, and GCP that holds 7% of the market shares. So, clearly, AWS is again a winner among Azure and GCP when it comes to market shares.

After going through the features, advantages, and disadvantages of Azure, AWS, and GCP cloud providers, we can say that surely all of these cloud providers are unique in their own ways and offer a variety of features and functionality to the developers. However, AWS managed services can be announced as a winner because of being the earliest cloud computing platform. But Google Cloud Platform and Microsoft Azure, both are close competitions and can equally likely serve the purpose for you. As being a mobile app developer you can choose better which one suits you as per the need and requirements of your project.

How To Design and Develop Android TV App [ 2022 Tutorial ]

What is Microsoft Azure?

What is Google Cloud Platform?

AWS vs Azure vs GCP Storage and Database Services Comparison