Best Android Libraries To Use In 2022 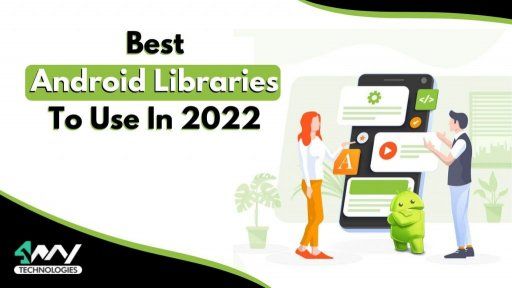 Being an Android programmer or developer is definitely not an easy task. It requires understanding and knowledge of the libraries, languages, and many more.

In order to help the programmers and make the app development process easy for them, we have discussed some of the best Android libraries for a number of Android app developers like you.

In simpler words, Android libraries and frameworks are a set of implementations, which are written in programming languages along with an impeccably defined interface.

In this article, we are going to discuss some of the best Android libraries that a developer like you can access while developing Android applications.

One of the major reasons for using these libraries is to expedite and optimize the Android app development process, i.e., develop an astounding app without any unnecessary or additional efforts. These new Android libraries for developers provide them with basic pre-written codes and other important elements that can be used instantly rather than performing these tasks from scratch.

So, if you have just started your career in Android apps creation and want to know about popular libraries that are a go-to tool of almost every Android mobile app development company, then this article is what you need.

So, let us start!

Android Libraries To Use In 2022 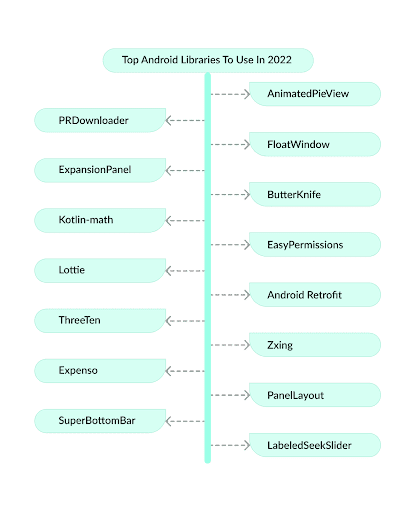 The following list of best Android libraries will help you in developing robust, scalable, and growth-oriented Android applications:

This Android library is responsible for displaying the ring and pie charts on Android mobile apps. It is released under the permissive Apache-2.0 license.

There are various features offered by this AnimatedPieView library. Some of them are as follows:

The documentation of this library is well-documented and plays a vital role in Android app development.

This library is one of the most popular Android app developing libraries used for downloading a file. Hence, PRDownloader is also known as the file-downloader Android library with the available support for resuming and pausing the downloading.

With the help of PRDownloader, you can download several types of files including pdf, image, apk, video, etc. It also helps you in downloading large files successfully. PRDownloader Android library is released under the Apache-2.0 license along with a flawless documentation.

PRDownloader involves a very simple and interactive interface for downloading a file. It also allows you to check the downloading status of a file with the help of the provided download ID.

PRDownloader is also responsible for giving callbacks for various things such as, onCancel, onError, onProgress, onStart, and more during a file download. It supports you properly in cancelling the request as well along with a number of available customizations.

FloatWindow is an Android library, which helps you add a “Floating Window” that can be displayed first before all your activities. The Float Window describes a Floating Action Button, which can be seen on the interface of your Android application.

ExpansionPanel is a perfect Android library, which is feature-rich and allows the developers to implement Expansion Panels. These panels include creation flows and enable the element’s lightweight editing feature.

With the help of ExpansionPanel Android library, you, as a developer can set-up a number of expansion layouts by allowing only one to be opened in a single time.

The ExpansionPanel library is one of the most user-friendly Android libraries available in the market. Also, this library includes an in-built sample app in order to make the task for developers a bit more easy. Additionally, the entire code of ExpansionPanel comes under the Apache-2.0 license with good documentation and you can also obtain the sample app from Google Play.

A view binding library ButterKnife makes use of annotation in order to generate boilerplate code for Android programmers. This is a top-notch Android library by Jake Wharton, and it is responsible for making the code simpler than ever before.

Now, rather than writing the setOnClickListener method for every view, you can make use of @OnClick annotation that gives click events for single or multiple views. In short, using a ButterKnife library is a lot easier for your Android project.

Now, you can use @OnClick annotation, which is responsible for giving click events for multiple or single views instead of writing the setOnClickListener method for every single view. For more clarity on its documentation, click this link.

Kotlin-math is a fantastic Android app building library. It is a comprehensive set of Kotlin APIs, which is responsible for allowing the developer to write graphics math in a much simpler way. These application programming interfaces are primarily modeled after OpenGL Shading Language for porting code from and to shaders in an easier way.

There are different value types that Kotlin-math library offers. This library also falls under the Apache-2.0 license and comes with great documentation. There are a number of APIs, which you can see as the top-notch functions rather than as methods.

EasyPermissions is another ideal wrapper library, which is responsible for simplifying the basic system permissions. With the help of this library, you will be able to check if your Android application has the needed permissions already or not. The documentation available for this library is also exemplary.

Additionally, EasyPermissions#requestPermissions is a permission requesting method, which will be responsible for requesting the system permissions and showing the string provided whenever it is needed. However, the given request code should be dissimilar to this request.

According to many experienced Android developers, Lottie library is a virtuous Android development library, which shows the syntactic role of Adobe After Effects animations. With the help of this library, even the beginner-level designers can create amazing animations for the first time. It currently supports shape layers, alpha mattes, masks, solids, dash patterns, and trim paths.

Also, Lottie Android library permits the developers to go backward & forward, and one of the most important things is that it also allows the program animation to respond to any kind of interaction.

Retrofit is another very popular Android development library which is responsible for providing the frameworks, which allow effective authentication and interaction.

This is a perfect library by Square that allows the connection of HTTP-based API services through the Android Apps. It takes the complete advantage of the core functionality of the OkHttp library, and also adds a number of upright features to it during elimination of the boilerplate code.

With the help of Retrofit you can easily receive data structures as compared to JSON. For example, Jackson and SimpleXML. Also, this library is a type-safe REST client for Java and Android. This will comprehensively map an application programming interface into the interface of a client using annotations.

The ThreeTen Android library helps efficiently in handling the time and data for Android. ThreeTen is JSR-310’s backport which was included in Java 8 earlier as a standard “java.time.*” package.

The standard Android Calendar API is quite challenging to work with, but the ThreeTen library is really helpful.

This library is responsible for processing the barcode image. You can implement Zxing with the help of Java and it also supports various programming languages. It also supports the 1D product, 2D barcodes, and 1D industrial.

Google also uses ZXing in order to get a number of barcodes on the web. Additionally, it also helps in creating the foundation of Barcode Scanner Android app, which we combine into Google Product and Book Search.

Expenso is a simple Android library, which is available to track your expenses. It was developed in order to display the usage of Android modern development components as per MVVM architecture, such as:

The documentation of this library is great and shows the entire project architecture and structure. Expenso supports light and dark mode and is released under the Apache 2.0 license.

Panel Layout is an Android UI library which is responsible for displaying a resizable and floating panel that has the capability to snap to the edges.

This library parses the iOS UI framework PanelKit and efficiently uses the ConstraintLayout for panel layout with the remaining content.

The documentation of this library is worthy and useful. However, many developers use it primarily for the purposes of testing.

This impeccable and efficient library is an AMNB bar library. AMNB is a short form for Android Material Bottom Navigation. This library is very simple to implement and understand. You can also use it to check how a custom bottom bar can be implemented. The documentation of SuperBottomBar is good and falls under the MIT license.

This library includes highly configurable and customized seek sliders, which come with sliding intervals, various possible tackling settings, and a disabled state. The version of this library is 1.1.0. You can also conclude the entire usage from the sample app and code.

We hope you will find this article helpful. After going through this blog, you will be able to understand some of the best Android libraries that you can use in Android app development with ease.

If you need to track your expenses in your Android app, then Expenso Android library would be an ideal choice. Similarly, if you need to add a floating action button in your app, then FloatWindow would be an appropriate choice for you. Each library has its own advantages and it is entirely dependent on you which Android library to choose as per the requirement of your project.

Android Libraries To Use In 2022