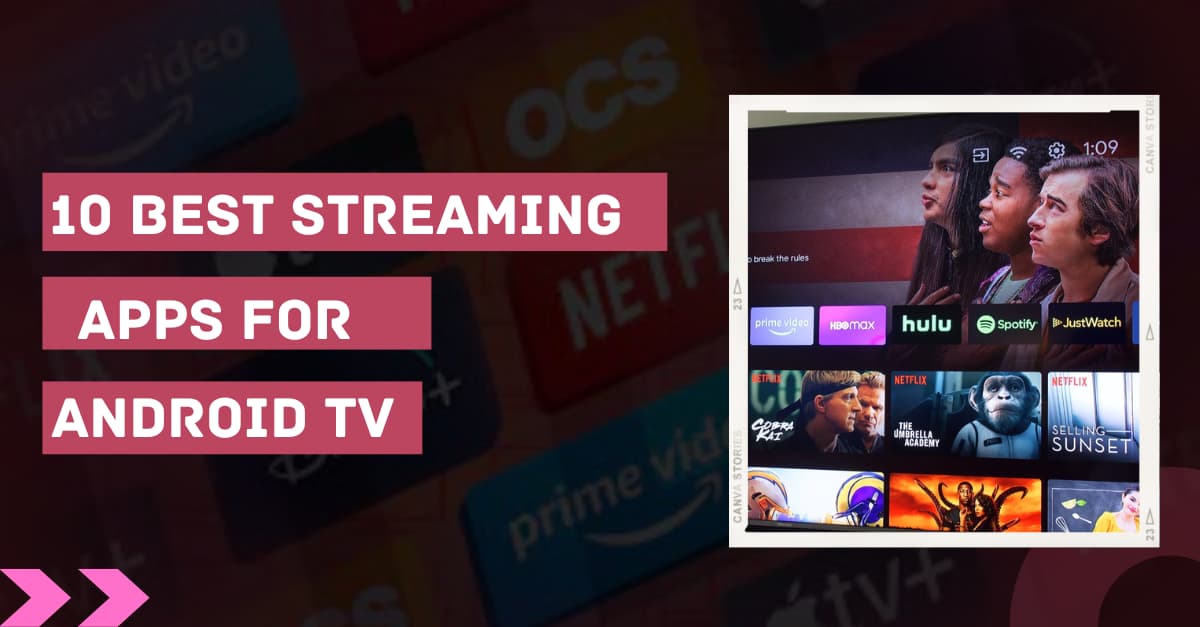 Given that “smart capabilities” are getting the modern standard in the television segment, by 2025, more than 266 million units of Smart TVs are expected to be sold worldwide. Although there are different smart TV technologies, Android TV is one of the most popular among users. While discussing smart TVs or specifically Android TV, it will be worthless if we won't discuss the best streaming apps available for users.

After the introduction of smart Television, the user experience of television has been enhanced dramatically. Similar to smartphones, you can access different apps on your Android TV. This provides a growth possibility for android tv app development companies. Let's list down the 10 best streaming apps and discuss their utilities.

Netflix is one of the leading TV apps with more than 140M hours of viewing each day globally. With a certain subscription charge, you can access unlimited movies and TV shows. The scripting platform of Netflix API incorporates several alterations each day and allows developers to design a custom API experience for different types of devices. This is achieved with server-based adapter code which developers execute by making HTTP requests.

Netflix is based on Cloud migration. Provided that the Cloud ecosystem is maturing, you can get advanced functionalities, robustness, and agility within the app. Moreover, container technology has enabled developers to be upfront in applying the end-to-end lifecycle of the app.

With an MX player, you can play all types of media on your android TV. Some of the other accessible features are online subtitles, syncing audio, scanning media devices, streaming media content, and multiple modes of decoding. You can play both online and offline content.

Some key utilities of MX players are as follows.

Plex, a popular android TV app, supports a huge collection of series and movies. You may be thinking that Plex is just another smart TV app. But no, some specific features are associated with Plex distinguishing it from other TV applications.

With Plex, you can organize series and movies on the basis of genres and ratings. Retro game lovers can use Plex to play their favorite retro games on the big TV screen sitting on their couch. It also supports Atari games. Along with this, you can install game emulators and ROMs on Android TV. One of the currently introduced features in Plex is its multi-room support.

Spotify is a popular music streaming app. You may have used Spotify to listen to music or podcasts while traveling. With Android TV support, you can run Spotify on your smart TV as well.

Using the Developer Platform of Spotify, you can make an in-depth analysis of the audio along with exploring different audio features. You can get the audio features of your play based on its valence, tempo, energy, and danceability. Developers can also embed audio widgets with few code lies. SpotifyConnect allows you to transfer and control playback. In addition, uploading, altering, and reading Custom Cover is possible as per the user's playlists.

One of the renowned Android TV apps, AirScreen allows users to cast Ipad, Laptop, and Mobile display on the TV screen. While casting any video on the TV screen, you don't have to experience delay lag. AirScreen boosts performance with improved hardware acceleration.

Along with getting the choice to cast your memorable moments (screen, photos, and videos) on the TV screen, AirScreen supports wireless streaming connectivity such as Miracast, DLNA, and Airplay. The most current version of AirScreen has in-built support for Widevine DRM technology. If you are wondering if you can support AirScreen on Oculus devices. The answer will be yes.

Wake on Lan is a helpful android TV app. It ensures that your computer is not in sleep mode. This allows you to get uninterrupted computer-cast videos on the TV screen. In case you are using the Plex app, Wake on Lan sends a signal over the web to disable the sleeping mode of the Plex server. Although it cannot be referred to as a streaming app, you can use it as an assisting app to your live streaming Android TV apps.

The app works on the Token Ring or Ethernet computer networking protocols. So, to activate the technology of Wake on Lan, you have to make changes in the computer’s BIOS.

TVUsage app is a Digital Wellbeing Android TV app. You can also refer to it as a Parental control app. With its advanced Software Development Kit, the app supports the configuration of screen time, app lock, and restricted usage hours. You can set 4-digit pins, in case you want to limit the screen time hours. Most importantly, you can lock any Android television application; thereby ensuring privacy. Developers have tested the app on NVIDIA SHIELD and found that users cannot use TVUsage on Television technologies other than Android OS.

Streaming live news is now possible with HayStack News. You can easily get it on your Android TV. Also, it supports the customization of newscasts based on the user's preference. You can access the option of Newsline to make the streaming more interactive and personalized. With the reinvented Haystack technology, you can link Google calendar with the app’s news ticker.

With Haystack News, streaming news has come a long to engage users with the live news directly. Now, the news is not just a one-way interaction. The UX design of the app is compiled with the Cast Design standards, making the app more user-friendly. It also improves the UI controls when users get phone calls.

If you are using Android TV, you may face difficulty in finding certain apps. In this case, the Sideload Launcher app is helpful. It allows you to display every sideloaded application on the dashboard of your android TV. Now with this app, android tv app development companies can extend their user base satisfying a wider demand of Android TV users.

It uses sideloading techniques. Thanks to this app, you can direct the Android TV to download apps meant for tablets or smartphones. You can access file manager applications to copy and view files on Android TV. Get the app called File Manager+ to organize all the sideloaded apps.

This Android TV app has a single button with one purpose. You can switch off Bluetooth discoverability to restore the privacy of your Android TV. Although it seems not so useful, it can be one of the life savior smart TV apps when you actually use it.

Apps, whether they are mobile, web, or smart TV are the go-to solution for nearly every task. This article brings you the 10 best android TV apps that you must install immediately to take your streaming experience to the next level. Be it gaming, live shows, movies, news, or audio, there are different apps for your smart Android TV. Also, there are some apps like Bluetooth Discovery Disabler and TVUsaage that ensure your privacy and digital well-being. Apart from the streaming TV apps, you would also like to get additional applications that can improve the overall watching experience.